No one project has dominated the shop this past month.  Lots of incremental progress on a bunch of long-term projects, though, so I'll just run through 'em real quick!

The '67 Cadillac has been done with paint for a while now, but we've been waiting for parts to come back from chrome and polish- there's a LOT of trim on these cars!  Our customer brought his new wheels out, so we threw them on real quick to make sure they would clear the fender skirts. 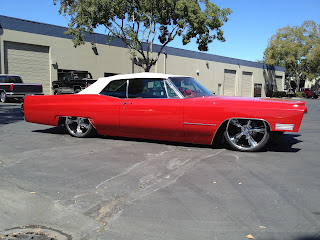 We took a '68 Chevy C10 in a week ago to install an air ride kit on the rear.  He's already got a complete Porterbuilt Dropmember on order for the front end, so we just needed to make a rear setup to match.  So far, we've notched the frame and set the bag mounts, and the new tubular trailing arms are coming together as well.  We'll be making a Watts Link to replace the factory Panhard bar, so this rear end will be locked in! 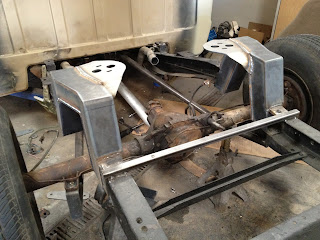 The '67 Galaxie we painted several months ago is starting to go back together.  Between hunting down NOS parts like the trim and light bezels, and sending other parts out for polishing and chroming, it's been quite a task getting everything looking like new.  We're hoping to have this one fully assembled within the next couple of months- still waiting on some more parts! 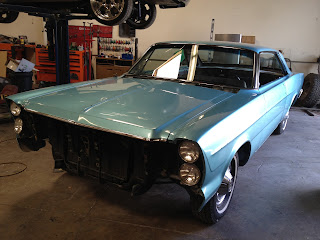 New dash cap inside- the rest of the interior will be getting freshened up, too! 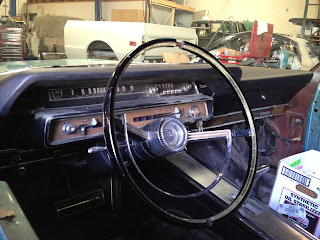 You know we like the odd stuff here at BC Fabrication, and our friend Shawn didn't disappoint!  He brought in his custom Toyota Previa for some repairs and upgrades to the air suspension, and it was a big hit down here.  People couldn't believe how good a minivan could turn out! Finally, we picked up another project for ourselves!  I don't know when we'll actually have a chance to work on it, but we'll hang onto it until its time comes!  1963 Chevy Suburban- very solid overall, and just begging for some mods!  I'll keep you posted... 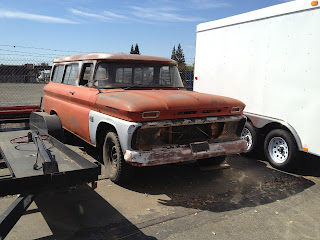 We've gotten some more work done on the '40 Pontiac, too- rear brakes are mounted, trunk actuators are built and ready to install, etc.  But I didn't take pictures, so you'll have to wait until my next post!  In the meantime, why don't you visit www.bcfab.com and get some parts for YOUR project?